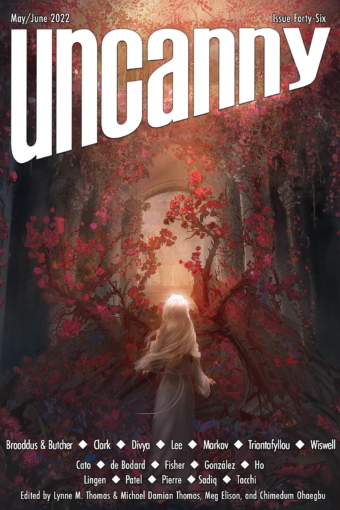 I usually do a post combining my favorite short stories and novelettes of the year, but I’m breaking it up into two posts this year due to sheer length and some technical stupidity that caused me to lose hours of work on the draft, necessitating starting over. Besides, novelettes often get overlooked and lost in the shuffle, so don’t they deserve a post of their very own where they can shine? Here, in no particular order, are my favorite novelettes from last year. (Note, additional favorites appearing in anthologies can be found in my anthologies and collections post.)

A story full of excellent worldbuilding examining complex family relationships and the idea of the next generation trying to do better and be kinder, wherein a scientist’s son steals a box from his father containing an AI whose sole programmed purpose is being miserable.

My Future Self, Refused by Adam-Troy Castro (Lightspeed)

A painful and heartbreaking story that I believe may be semi-autobiographical, about a man grieving the death of his wife, who is visited by a future version of himself.

A story with a wonderful voice about a slave named Hercules working in George Washington’s kitchen who uses cooking magic to subtly alter the course of history.

A charming and smoothly-written coming-of-age story about a young woman who has inherited her mother’s powers as the noon witch, a Russian deity who responsible for sunstroke, desperately trying to prove she is more than her heritage by attending a desert music festival.

The Difference Between Love and Time by Catherynne M. Valente (Someone in Time, reprinted at Tor)

A gorgeous, twisty, and dream-like story about a young woman in love with the space-time continuum, who keeps manifesting in different guises across her lifetime, exploring their tumultuous relationships.

Quandary Animu Vs. the Butterfly Man by Rich Larson (Tor)

A story with a wonderfully slick cyberpunk feel, following the titular character’s attempts to outrun an inhuman assassin with the help of her father’s disembodied preserved head.

Surreal and bittersweet, with a wonderful voice and characters who make unexpected choices about perpetuating lies and breaking the cycle of violence. A family of stranded colonists tries to cope with a son who has become something monstrous while pretending everything is fine, leaving their daughter to carry a terrible burden, until she discovers the unsettling truths her parents have been trying desperately not to see.

A Record of Our Meeting with the Grand Faerie Lord of Vast Space and Its Great Mysteries, Revised by A.T. Greenblatt (Beneath Ceaseless Skies)

Gorgeous worldbuilding and a wonderful, twisty narrative that loops in on itself as a member of a stranded spaceship crew tries to rescue their ship after an encounter with the faerie lord, necessitating a break with tradition to forge a new path home.

The Memory of Water by Tegan Moore (Clarkesworld)

An eerie story about an educational exhibit recreating the lost oceans of the world, which is seemingly being haunted by the ghosts of extinct marine life.

A beautifully-written reimagining of the story of Rumpelstiltskin exploring themes of power, privilege, sacrifice, and the way people define themselves.

This Place is Best Shunned by David Erik Nelson (Tor)

A highly effective cosmic horror story about a woman who agrees to help her boyfriend to break into a creepy abandoned church that he believes will be the perfect venue for his latest art project, and the unsettling discovery that ensues.

If You Find Yourself Speaking to God, Address God with the Informal You by John Chu (Uncanny)

A quiet and sweet superhero story that explores the added complications of negotiating a new relationship when one party happens to have superpowers, which also draws nice parallels between being closeted in terms of sexuality and in terms of superhuman ability, as well as delving into anti-Asian discrimination.