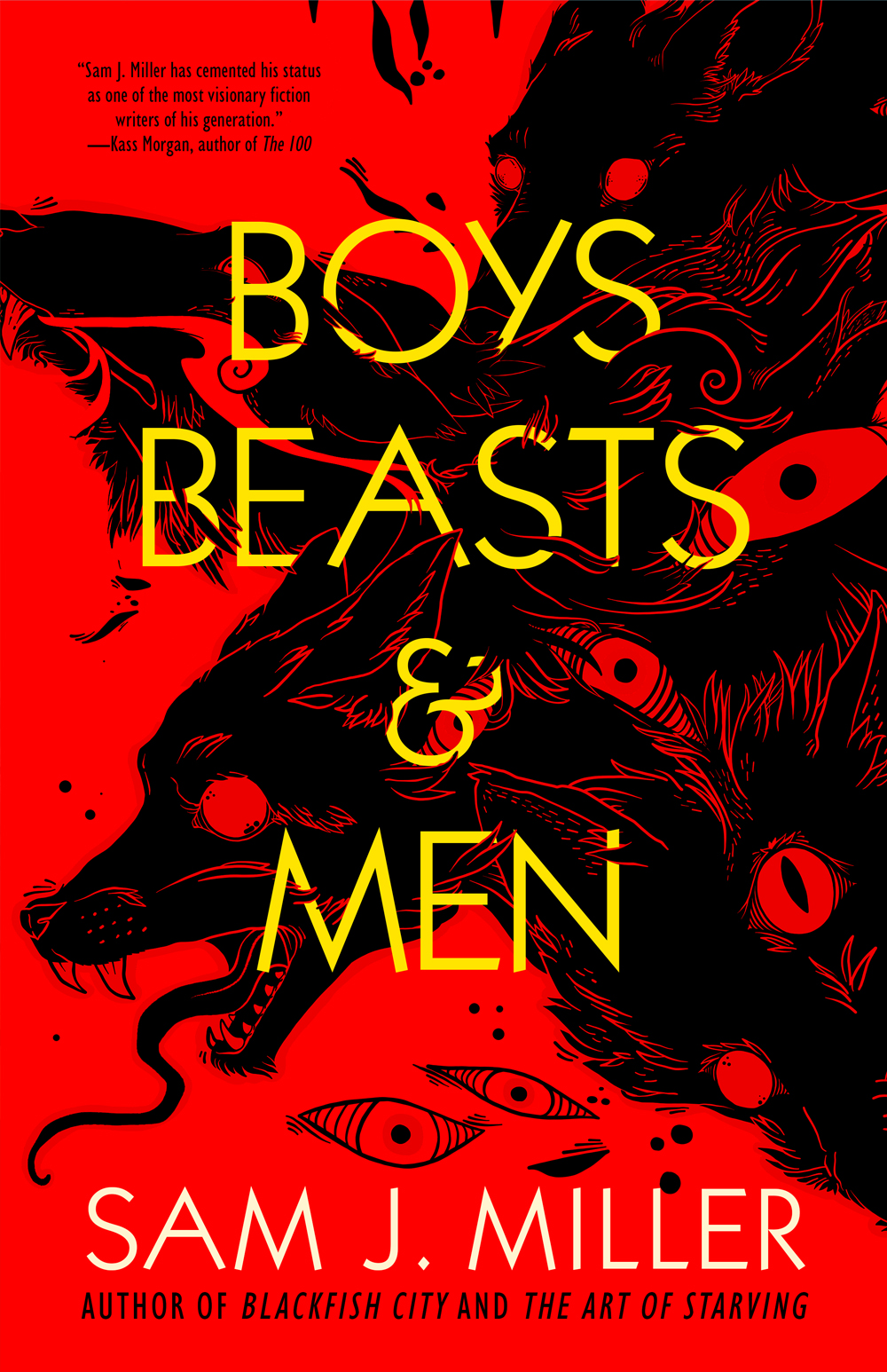 This was quite a strong year for anthologies and collections, and below are a few that I wanted to highlight as favorites. As with the novels and novellas post, I may edit this to sneak a few more in as I continue to catch up on reading. A separate post highlighting short stories and novelettes not published in anthologies or collections is still forthcoming. In the meantime, here – in no particular order – is the collected short fiction I loved in 2022!

Given how prolific Sam J. Miller is when it comes to short fiction, it’s kind of amazing that this is his first collection, though I’m sure it won’t be his last. The stories collected here offer a nuanced exploration of masculinity and the many faces of love – what does it mean to be a boy in a broken family, or a loving one, to be a man who loves other men, who longs, who finds happiness and heartbreak? All of this is presented through the lens of the fantastic with stories featuring literally mind-altering drugs, resurrected dinosaurs, near-future worlds in post environmental collapse, and as the title suggests, plenty of monsters. It’s a truly gorgeous collection, fantastically queer and fantastically dark, echoing with pain, but offering up hope and righteous, burning anger, and joy as well. Miller writes with a deep compassion that shows the monstrousness in humanity and the humanity of monsters with stories that can rip your heart out, or mend it, or do both all in one go.

Dark Breakers exists in the liminal space between mosaic novel and collection. Each story stands on its own, but they exist in the same world, with characters crossing from one to the other, and events bleeding over as well, making them interconnected. Cooney’s prose is always lush and sensuous and lyrical and Dark Breakers is no exception. Much like the characters in the stories themselves, who find themselves crossing the border between this world and the Valewold, populated with beautiful and dangerous gentry, reading these stories is like stepping into another realm entirely. The stories are immersive, transporting you and taking your breath away in the best of ways. Cooney has written other work in this setting as well, including the novella Desdemona and the Deep, which is a good thing, because once you’ve had a taste of this world, you’ll never want to leave it.

You Fed Us to the Roses by Carlie St. George

I’ve been a fan of St. George’s work since I first discovered it, and it’s wonderful to see a collection bringing so many excellent, dark, and delicious stories together. The stories in this particular collection, like Miller’s collection, offer variations on certain themes, interrogating and dissecting horror genre tropes, looking at slasher stories, fairy tales, final girls, and monsters, and many of the stories are coming of age tales, exploring the idea that sometimes one of the biggest sources of horror can be the uncertainty that comes with simply growing up.

Other Terrors edited by Vince A. Liaguno and Rena Mason

Other Terrors is a strong anthology, exploring a wide range of horror, with all original stories. The stories that stood out to me in particular were: Idiot Girls by Jennifer McMahon, Mud Flappers by Usman T. Malik, The Turning by Hailey Piper, Help! I’m a Cop! by Nathan Carson, and The Asylum by Holly Lyn Walrath. My two favorites among all the excellent works, however, were The Devil Don’t Come with Horns by Eugen Bacon, and The Incident at Bear Creek by Tananarive Due. Both can be read as coming of age stories, or at least stories with young protagonists whose world view is irrevocably altered by an encounter with something horrific. I particularly like the dream/nightmare-like voice of Bacon’s story, and the characters in Due’s story were wonderful and heartbreaking, facing a very personal kind of horror.

Death in the Mouth edited by Sloane Leong and Cassie Hart

Another really strong horror anthology with a few stories that really stood out to me, which were: Water Goes, Sand Remains by Jolie Toomajan, Wind-Up Teeth by Endria Isa Richardson, Paradise by Sloane Leong, Tongue is a Void by PH Low, Some of Us Are Grapefruit by Rivers Solomon, Melinda and the Grub by Ras Cutlass, the Black Hole of Beaumort by Karin Lowachee, and On Tattered Wings by Jessica Cho. My absolute favorite of the bunch was What Hurts Henry Watanabe by JL Akagi, which managed to be simultaneously creepy and sweet. The story is full of evocative writing and striking imagery, and starts off with serious Green Ribbon/Bluebeard vibes, but takes a much different turn by the end.

This anthology had a somewhat fraught journey to publication, originally slated for release in either 2020 or 2021, and finally coming out in January of this year. It mixes original and reprint stories, all themed around water, as the title implies. The standouts for me were: Seventh Generation Algorithm by Andrea Hariston, Love Hangover by Sheree Renee Thomas, Juniper’s Song by Marie Vibbert, Deep Like Rivers by Christopher Caldwell, Lilies and Claws by Kate Heartfield, The Weaver’s Tale by Cecilia Quirk, and The Ancestor Tells Me About the Time She Forgot Osun by Marie Osunbimpe Hamilton Abigunde. My favorite two stories were actually a pair of stories sharing a world and characters, though by two different authors, with one being a reprint and the other an original. Numbers by Rion Amilcar Scott and Spirits Don’t Cross Over ‘Til They Do by Jamey Hatley concern characters obsessed with the idea of mythical female water spirits, who are trapped by the circumstances of their lives – involvement in organized crime for one, and the horrors of war for the other. The voice of both stories is fantastic, and both explore compassion, violence, and trauma in wonderful ways. Because the anthology took such a round-about journey to publication, I’m afraid a lot of people may have missed it, but it’s well-worth checking out!

Dark Stars is an anthology dedicated specifically to longer fiction, with the majority of the stories being at least novelettes and one that I think may technically be a novella. As such, there are only twelve contributors, and each of their entries are strong. The standouts for me were: The Attentionist by Caroline Kepnes, Volcano by Livia Llewellyn, All the Things He Calls Memories by Stephen Graham Jones, The Sanguinalist by Gemma Files, Mrs. Addison’s Nest by Josh Malerman, and Challawa by Usman T. Malik. One of the things I appreciated the most about the anthology is its range and how distinct each story’s voice felt. Kepnes story presents a mundane, non-supernatural horror, which is all the more terrifying for how plausible it feels. Llewlellyn’s story is full of twisty prose, bringing in elements of cosmic horror, leaving the reader uncertain and keeping them off-balance. Jones’ story combines mundane horror with hints of the supernatural, introducing gaslighting and pandemic paranoia to effectively keep the main character and the reader uncertain about what is real. Files’ story has a wonderful noir tone, and goes full on supernatural horror with necromancers and blood magic. Malerman’s story has a very Stephen King vibe, moving from past to present as a group of friends reunites to confront a horror from their childhood that has the ability to make them doubt reality and forget themselves. Malik’s story combines fairy tales, myth, urban legend, ghost stories, and history, layering them together seamlessly in an unsettling tale about personal horror as well as the horrors of industry and colonialism. Overall, another very strong anthology that’s definitely worth a read.

2 thoughts on “Favorite Anthologies and Collections of 2022”